Skip to content
You are here:Home-Technology-Gartner 2017 Magic Quadrant for Data Science Platforms

Gartner new 2017 Magic Quadrant for Data Science Platforms (called in 2016 “Advanced Analytics Platforms”) was published last week. The 2017 report evaluated a new set of 16 analytics and data science firms over 15 criteria and placed them in 4 quadrants, based on completeness of vision and ability to execute.

While open source platforms like Python and R play an important role in the Data Science market, Gartner research methodology does not include them, so this report evaluates only commercial vendors.

Gartner notes that even the lowest-scoring vendors in MQ are still among the top 16 firms among over 100 vendors in the heated Data Science market.

As we did in our popular post last year: Gartner 2016 Magic Quadrant for Advanced Analytics Platforms: gainers and losers, we compared 2017 Magic Quadrant with its 2016 version. Below we examine the changes, gainers, and losers. 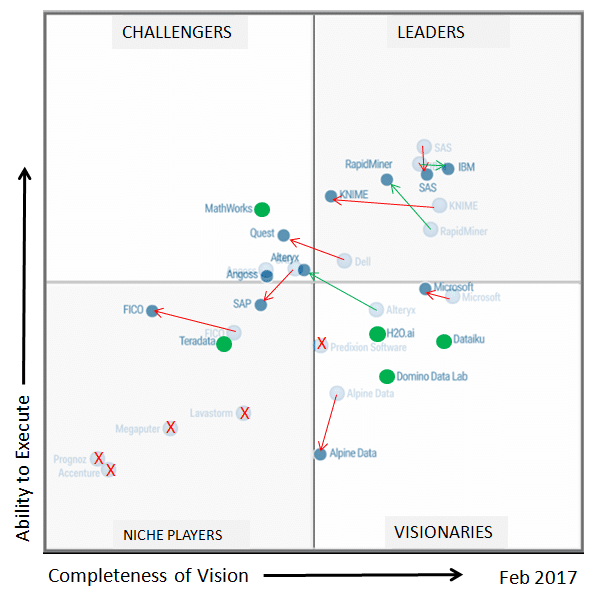 The same 4 firms: IBM, SAS, RapidMiner, and KNIME, which were leaders in 2014-2016, are again in the leaders quadrant. Dell Software, sold in Nov 2016 and renamed Quest, and its Statistica Analytics suite moved from Leaders to Challengers quadrant.

IBM: is again a leader, based on SPSS Modeler and SPSS Statistics. Gartner did not evaluate IBM new Data Science Experience (DSx) platform but DSx contributed to IBM’s improved position along Vision axis. IBM strengths include its vast customer base and continued innovation of its data science and machine learning capabilities. However, IBM breadth of offerings (SPSS, IBM Watson, DSx, Cognos) creates some confusion in the market and SPSS line has interoperability problems.

SAS provides a many software products for analytics and data science. Gartner evaluated covers SAS Enterprise Miner (EM) and the SAS Visual Analytics Suite (VAS). SAS is more focused now on interactive modeling with VAS, but continues to support its traditional base SAS. SAS retain a strong position in the Leaders quad, but confusion about its multiple products and concerns about high cost led to decline in Ability to Execute.

KNIME offers open-source KNIME Analytics Platform with strong functionality for advanced data scientists. It is strong in several industries, especially in manufacturing and life sciences. It lost somewhat along the Vision dimension due to weaker marketing and innovation compared to other leaders.

RapidMiner offers GUI-based data science platform, suitable for beginner and expert data scientists. It also offers access to open-source code. RapidMiner is available both as a free version and a commercial edition (with extra functionality for large data and connections to more data sources). RapidMiner is in leaders quad due to its market presence and well-rounded product.

You can download the Gartner 2017 Magic Quadrant report for Advanced Analytics Platforms from RapidMiner, Dataiku, and probably other vendors favorably mentioned in this report.

You can also download a related 2017 Gartner Magic Quadrant for BI & Analytics from Tableau.